A World of Innovation: Exploring the 1893 World’s Fair 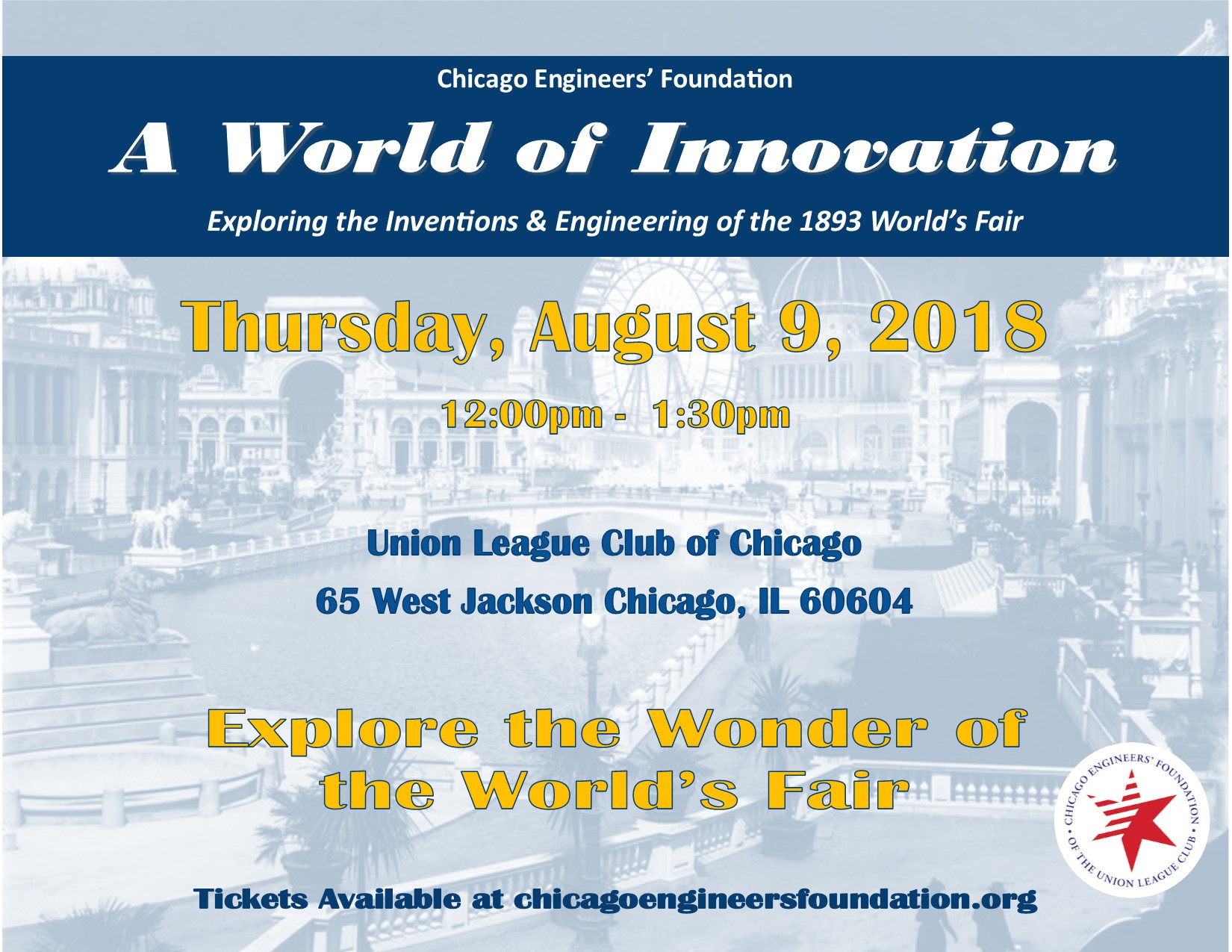 CEF hosts an informative and engaging luncheon focused on the inventions and engineering of the 1893 World’s Fair. The event includes a moderated panel discussion and viewing of World’s Fair items from the Union League Club’s collection.

Panelists:
Greg Borzo
Greg Borzo is an award-winning journalist with a master’s degree from Northwestern University. He’s been a writer at the Field Museum, the American Medical Association, and the University of Chicago.  He is also a tour guide and public speaker. Greg has written several books, including Chicago’s Fabulous Fountains, The Chicago “L,” and Chicago’s Cable Cars

Sid Bennett
Sid Bennett is an electrical engineer and inventor who worked for 40 years in the aerospace and telecommunications industries. He has been awarded 14 US patents. After retiring from industry he has practiced patent law in Chicago for the past 15 years. He was awarded the IEEE Third Millennium medal and is the immediate past president of the Chicago Engineers Foundation.

Kevin Griebenow
Kevin Griebenow is a civil engineer with the Federal Energy Regulatory Commission (FERC).  Prior to FERC, he worked for on the National Flood Insurance Program at the Federal Emergency Manage Agency (FEMA), and the United States Army Corps of Engineers. After graduating from college at the University of Minnesota, he joined the Peace Corps and built water supply projects in villages in Yemen over 2 ½ years. Kevin is also a docent with the Chicago Architecture Foundation (CAF), and has been giving tours for the CAF for 26 years.

Moderator:
Erik Cempel
Erik Cempel has over 17 years’ local, national, and international experience in transportation planning and policy. Erik is Amtrak’s Infrastructure Planning Manager at Chicago Union Station, where he manages the implementation of the Chicago Union Station Master Plan and helps integrate it with the station’s real estate Master Development. Previously, Erik was a Principal of Cambridge Systematics, where he led state, local, national, and international transportation planning studies, including many studies here in Chicago. He also worked for two years for the Korean government conducting domestic and international transportation studies. Erik graduated with a Master’s degree in Transportation Systems from Cornell University.

CEF is honored to host this special event in collaboration with the Union League Club of Chicago’s 125th anniversary celebration of the Chicago World’s Fair.

The Union League Club maintains a business casual environment at all events. Denim is not approved attire at this venue.