At the September 24th Chicago Engineers’ Foundation (CEF) Annual Meeting, outgoing President Erik Cempel received the 2020 Distinguished Alumni Award.  Mr. Cempel is the second alum of the CEF Incentive Award program to receive this honor for his professional accomplishments and dedication to empowering Chicago’s next generation of engineers.

Erik Cempel was first introduced to Chicago Engineers’ Foundation in 1996, as a graduating senior at Marist High School.  Mr. Cempel recalls, “In high school my grandmother encouraged me to apply for scholarships to college, and she sent away (at the time by regular mail) for a list of scholarships. One of the scholarships I applied for was the CEF award, which I won. While the amount was modest, it was an honor to be selected.”  Erik Cempel went on to earn an engineering degree and master’s degree at Cornell University.

Professionally, Erik Cempel has 19 years’ local, national, and international experience in the planning and implementation of transportation infrastructure and policy. He currently runs his own consulting firm, Cempel International Transportation Consulting. Previously, he was Amtrak’s Program Manager for the implementation of the $1 billion Chicago Union Station Master Plan. For most of his career, Erik was a Principal of Cambridge Systematics, where he led transportation planning studies around the world and was regional manager for staff in the central US. He also worked for two years as a researcher at the Korea Transport Institute.

While Mr. Cempel’s work took him around the world, when he returned to settle in Chicago he looked to get involved with CEF, the organization that first recognized his merits as a future engineer.  “The award may be even more meaningful to me now then it was then. I realized that busy people, with other time and monetary obligations, devoted their time and finances to myself and other students because they believed in us and in engineering.”  Mr. Cempel worked with then CEF President Nancy Ross as a member of the Board of Directors, and became of the founders of the CEF School Outreach Program.

In 2017, Erik Cempel became President of the Chicago Engineers’ Foundation, the first alum to lead the organization.  Under his leadership, Chicago Engineers’ Foundation developed its first multi-year strategic plan, received its first foundation grants, developed career resources for award recipients, and expanded the outreach program to impact over 1,000 students annually.

In addition to his volunteer work with Chicago Engineers’ Foundation, Erik Cempel is also President of the Rotary Club of Chicago, the founder and past chair of the Young Professionals in Transportation (YPT) Chicago Chapter,  a long-time board member for the Illinois Section of the Institute of Transportation Engineers (ITE), and served as the ITE scholarship chair and Midwest District Conference chair.

On behalf of the students served by the Chicago Engineers’ Foundation, the leadership is honored to present Erik Cempel with the 2020 Distinguished Alumni Award for all he continues to do to further engineering and empower Chicago’s future engineers. 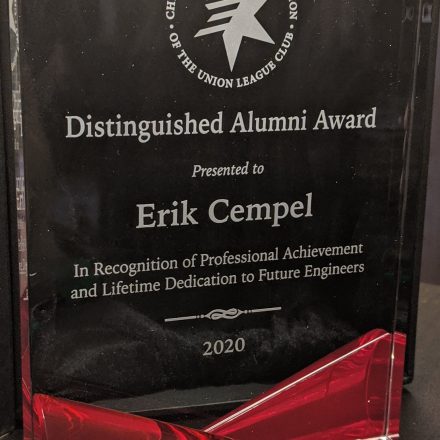 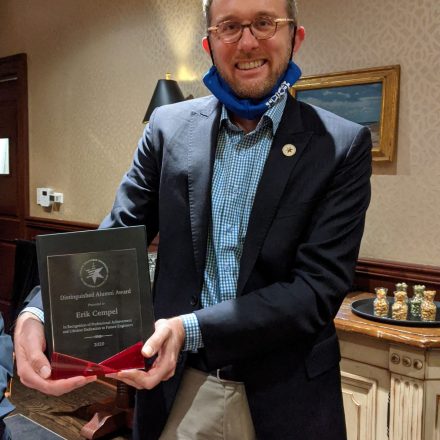